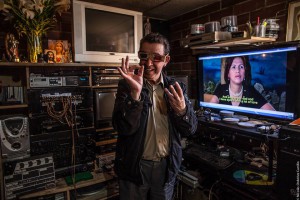 This film follows film director Jairo Pinilla, in his creative process and financial struggle in the production of his latest movie, The Shadow of Death, the first Colombian terror movie in 3d. Pinilla is the precursor of terror and science fiction (B movie series), in Colombian cinema ( 10 feature films directed). After more 10 years, Jairo is back to prove why he is the master of terror, in one of the most terrorific countries of Latin America.

About the Author: simon